As a young girl I read “The Diary of Anne Frank” and have continued to read many books about the Holocaust.  I have never ceased to be inspired  by the courage and the power of the human spirit displayed by the Jewish people.  On Monday I visited the Auschwitz Concentration Camp.  It was bitterly cold, the sky was steel grey, a thick blanket of white snow covered the ground and there was a deep sense of desolation – just as I have always pictured it in my head.  Walking around and seeing for myself what the Jews had to endure at Auschwitz and Birkenau will be etched in my heart forever… 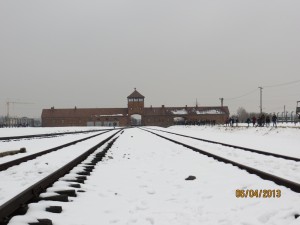 Today I went 135 metres underground at the Wielickza Salt Mine.  We walked 380 steps down a wooden staircase to reach the first level and then walked for 2.5 kilometres along winding  passages and through huge caverns carved from salt.  Salt has been mined here for over 900 years, but today it is more of an underground museum.  It was fascinating to learn how salt has been mined over the centuries, but even more impressive are the statues, carved scenes and chapels including the magnificent Chapel of Saint Kinga all chiseled and sculpted out of salt (even the chandeliers!).

We only saw one percent of the mine.  It has 2000 chambers that would take 7 weeks to walk!  I can’t imagine living in the mine like the miners did and was quite relieved when the elevator finally took us up to the surface.  Our guide Isabella counted us all regularly to ensure nobody got lost or left behind along the way.  During the busy Summer period over 8000 people a day visit the mine…I can now definitely understand why they do!

It was tricky taking photos…this is a beautiful salt carving from one of the chapels. 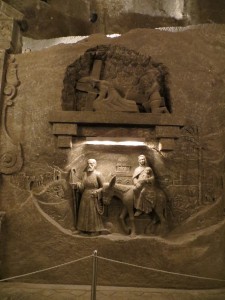 The Wawel Dragon sits at the bottom of the famous Wawel Castle.  All Polish children know the legend (see below) of the most famous dragon in Poland.  I wish he was breathing fire when I was taking his photo! 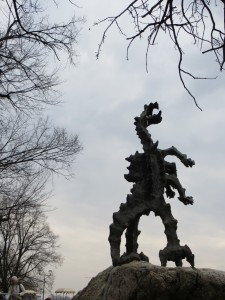 As the popular folk legend has it, during the reign of King Krak – the legendary founder of Krakow, an evil dragon had a cave under the Wawel Hill. It used to kill the locals and devour their livestock. Every month, a young woman had to be sacrificed to appease the ravenous beast. As a result, only one young woman was left in the town – the king’s daughter – Wanda. The king got desperate, because all of the brave knights failed to kill the beast. Eventually, he promised the hand of his daughter to anyone who would kill the dragon. One day, a poor cobbler’s apprentice – Dratewka stuffed a lamb skin with sulphur, sewed it up and put in front of the cave. When the dragon swallowed the animal, it became extremely thirsty. To quench its enormous thirst he started drinking water from the Vistula river. When he drank half of the water from the river, its belly was so swollen that the beast blew up. Dratewka married Wanda and they lived happily ever after.