This afternoon at Felice Arena’s Book Launch for The Boy and the Spy, I was thrilled to see one of our Year Three students there too. He and his mum had made a big effort to get to the Readings Kids Bookshop in Lygon Street after his football game! We are going to share this blog post…

When I walked into the bookshop and I saw Felice I was like…WHAT?
Felice was dressed as a, hmm let me think…
An old grandpa?
Nah!
Aha! I’ve got it!
Felice is dressed as the boy from ‘The Boy and the Spy’.

BUMP! 🙈  Who did I run into? MissY 😀  After a chat with Miss Y and Adrian Beck we had a wander around the the store and we all enjoyed an ‘Italiano’ biscuit.

Jerry Connolly read the first chapter of, ‘The Boy And The Spy’ to the crowd.
“Il ragazzo…..”
As I stood there and listened to the story I felt super engaged in the book!

I had my photo taken with Felice and he signed two books for me! 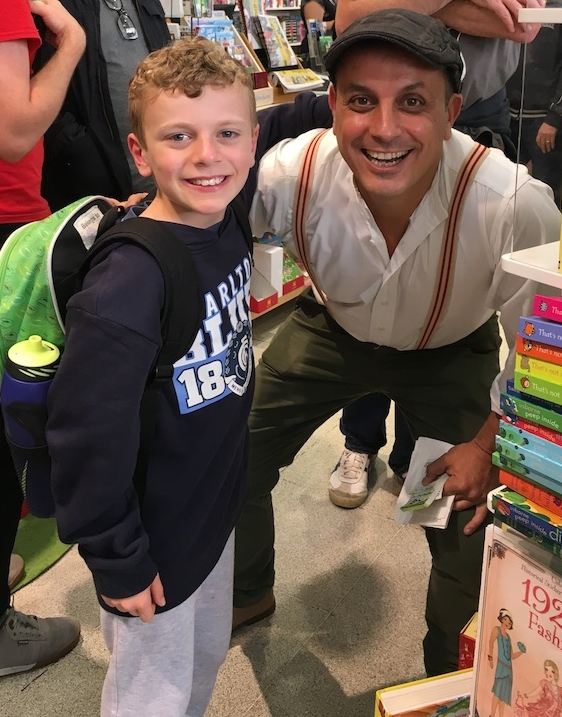 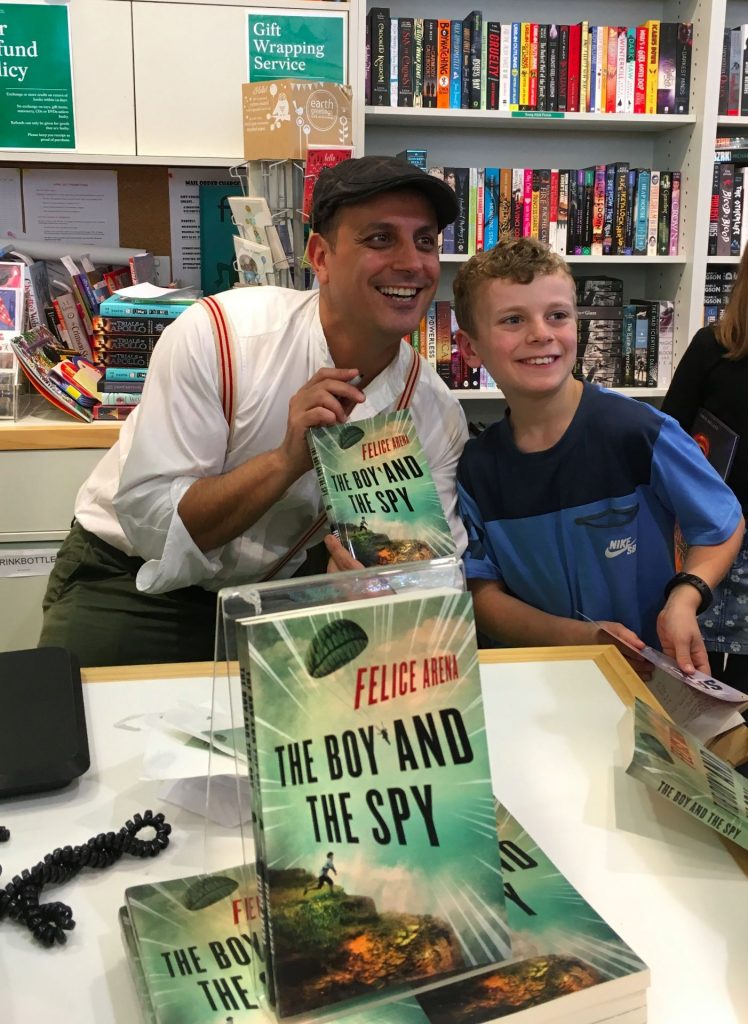 Felice had an impressively scrumptious cannoli cake to celebrate the launch of his book with his family, friends and fellow authors including Adrian Beck. 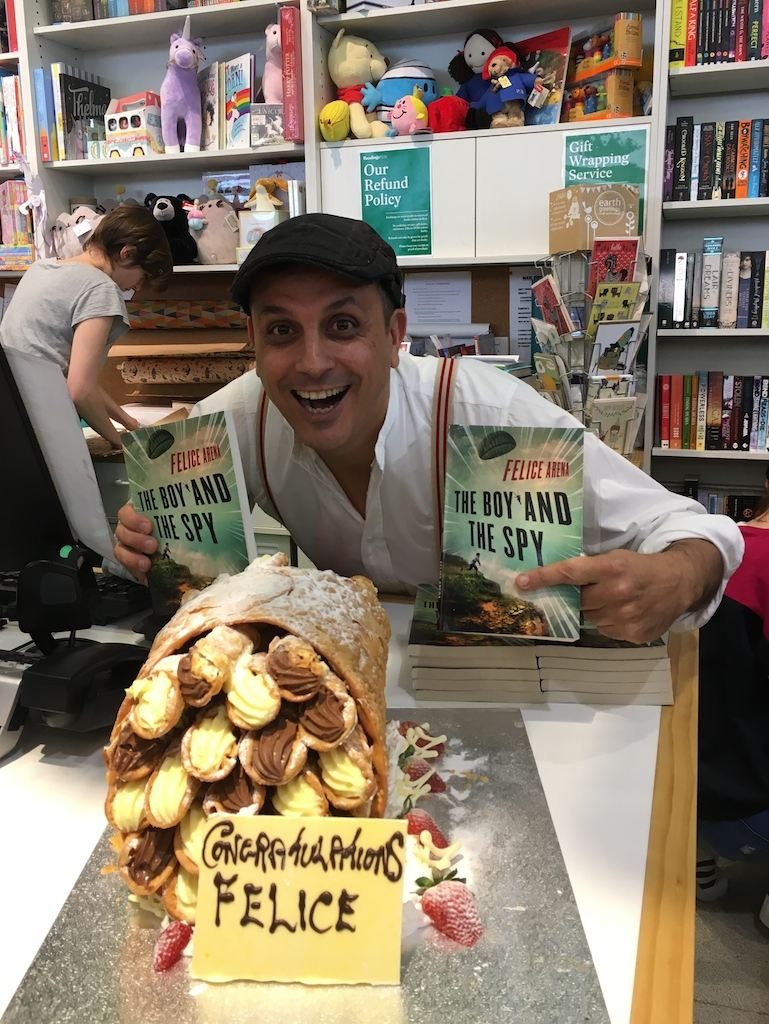 Felice told us that he has been writing children’s books for 20 years! The Boy and the Spy is a new direction for his writing and he is very excited about this book and the one he is currently writing. 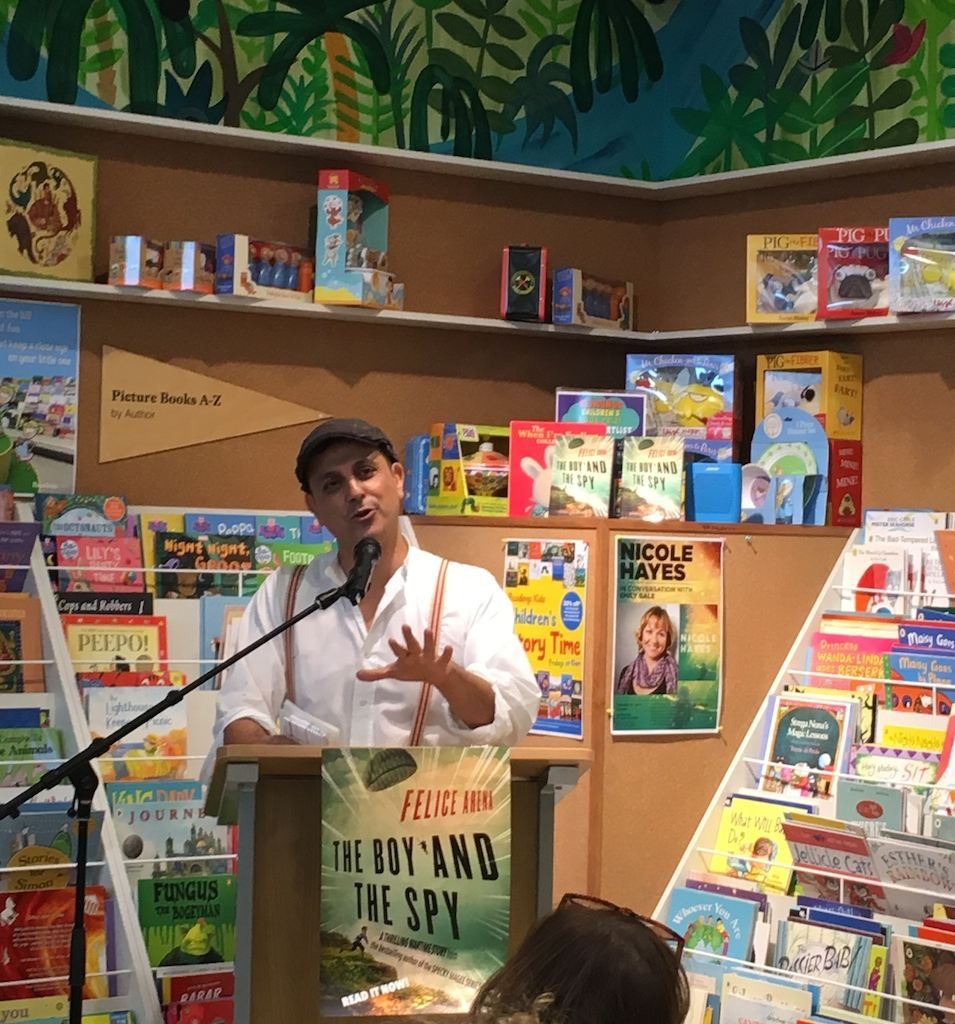 Felice’s friend Gerry Connolly read the first chapter of The Boy and the Spy to us. We were transported to Sicily during WW2 and running breathlessly with Antonio to the top of il Diavolo as we listened to Gerry’s rich deep voice…I love being read to! 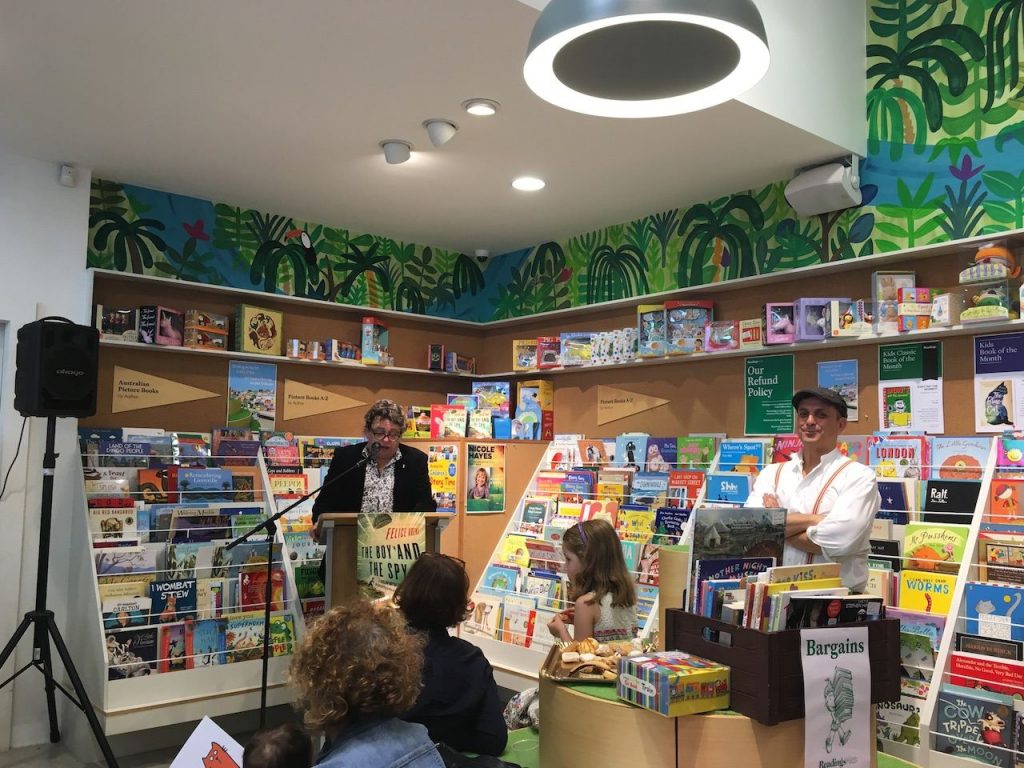 When we arrived we were all given a raffle ticket. The book launch ended with five lucky people’s names called out to receive a St Christopher medal as a special memento from the story (The Year 5s know why the medal is important in the story!).

Thank you for a fantastic book launch, Felice and giving us a little taste of Sicily on a Sunday afternoon. 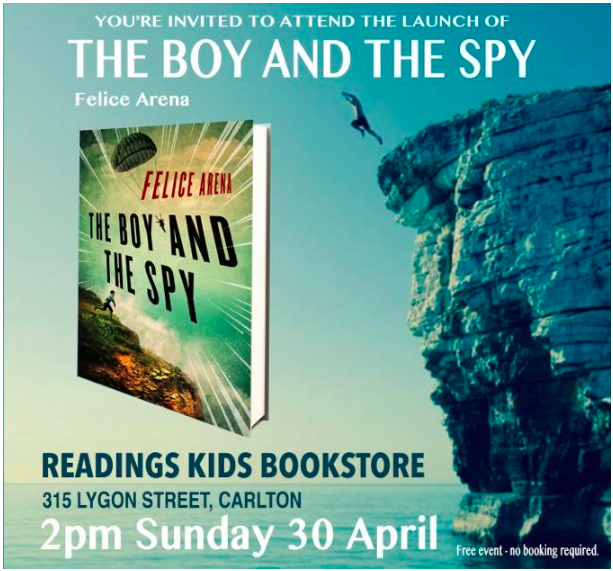 There will also be a special surprise guest doing a reading-performance from the book.

Felice is currently writing his next book which is another historical fiction story. Here he is writing at one of his favourite libraries which he likes to call his ‘office’… 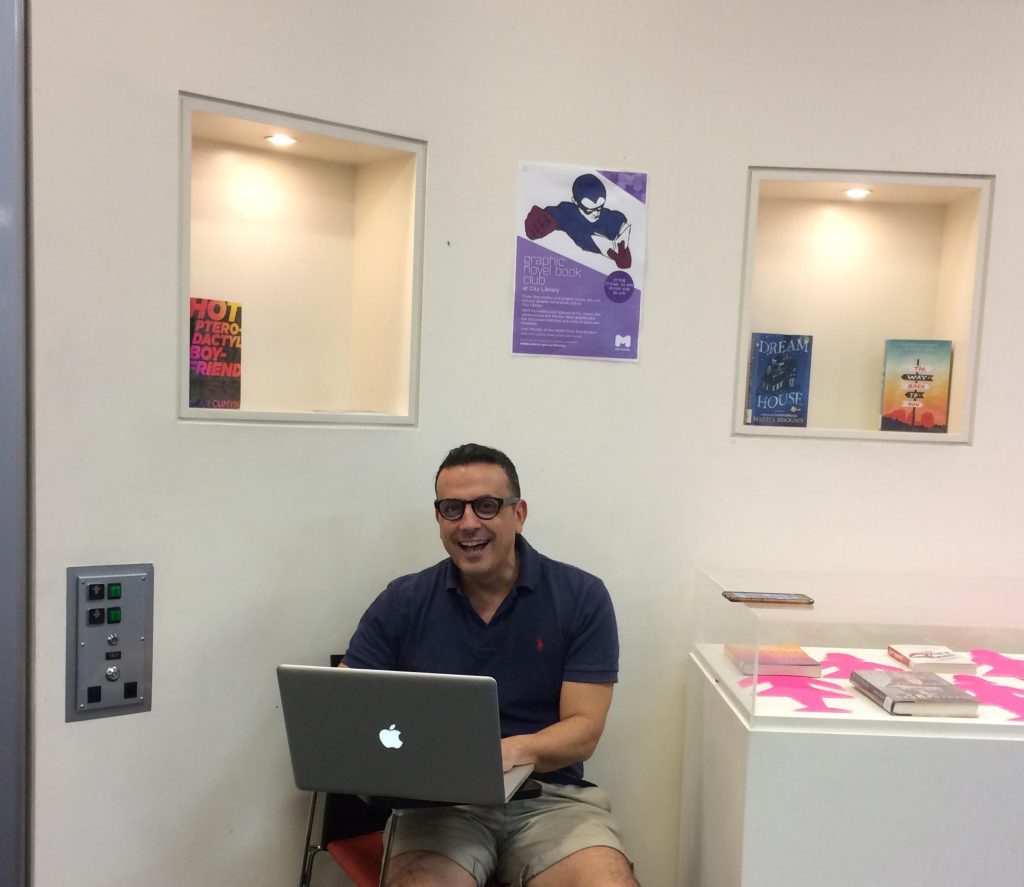 Felice Arena has lots of fans across all year levels at our school who have enjoyed reading his books including Specky Magee, Andy Roid, Stick Dudes and his recent Sporty Kids series.

This year Felice will take his older readers on a thrilling adventure set in Sicily in World War II with his new historical fiction novel called The Boy and the Spy. As a ‘rota’, his main character Antonio does not have an easy life in the town where he lives with Mamma Nina. When Antonio encounters a spy who needs his help he is caught up in the world of spies and freedom fighters where courage and quick thinking are required if he is to survive. 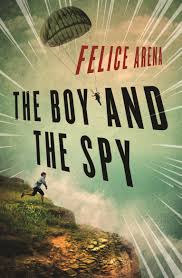 Last Wednesday the Year Fives were very lucky to be the first students to hear Felice talk about his new novel. They learned that it was a conversation with his parents about life in Italy before they emigrated to Australia that sparked the idea for The Boy and the Spy.

Authors use different strategies to help them with their writing and Felice shared two of his. He played some pieces of music he listened to when writing that helped him create the tone of the story. Then he showed us images he used to create a visual story board to help him to visualise and plan his ideas. Authors of historical novels also need to do research to ensure the information in their story is accurate. Some of Felice’s research included learning about Morse Code and the students had fun creating some Morse Code with him…in not quite the traditional way!

Felice then read the first chapter of his novel and you could have heard a pin drop in our library. There is something very special about listening to an author read their own words as they breathe life into their story. The first chapter was very dramatic and left everyone wanting to hear more…a perfect way to introduce your new book to readers! 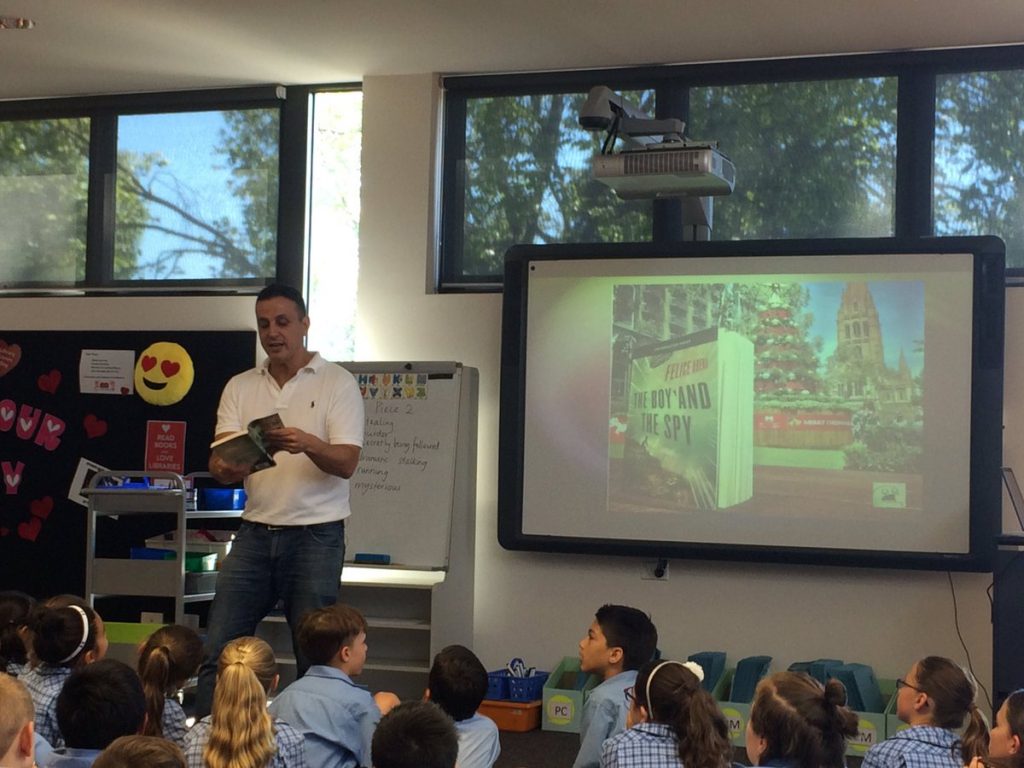 I went home that night and read my copy of The Boy and the Spy and didn’t put it down until I had finished it! I’m not going to give too much away except to say…I felt like I was there with Antonio and held my breath as he carried out some of his daring plans to help the spy and hoped he wouldn’t be caught; admired the freedom fighters who risked their lives; drooled at the descriptions of the sweet sugary pastries at Pasticceria Antica; shed some tears both happy and sad and loved the way little pieces throughout the story came together like a jigsaw puzzle at the end. Now I hope Felice will also tell Simonetta’s story one day just as well as he has written Antonio’s. I sent this tweet to Felice…

Thank you for visiting us Felice and enjoy sharing The Boy and the Spy with students across Australia! I know that our students are going to enjoy reading it…

Today was our second Yeo-Low Medal Award and an exciting day for the 73 students who completed the Reading Scavenger Hunt for our 2016 Yeo-Low Medal.

A rainy day forecast changed our school’s usual Footy Day plans so I decided to hold our Yeo-Low Medal Award in the library with our author friend Adrian Beck. Little did we know Adrian had a surprise for us and had invited Felice Arena along as well. How lucky were we to have two of our favourite authors in our library!!

Our Yeo-Low Medal readers should be VERY proud of their efforts to complete this year’s Reading Scavenger Hunt. Between them they have read over 600 books by Australian authors! I added a creative element this year and our library is currently a gallery of their creative work including cakes, Anzac biscuits, models, posters, poems, drawings, story cubes and book reviews about the books they have read.

During our award ceremony Adrian serenaded us with a song; we enjoyed sharing some of our creative work; people crossed their fingers hoping their name would be drawn for the Indigenous football (or two mini footballs) or that they were going to be presented with the Yeo-Low Medal this year. After cheering our winners, Felice had everyone up on their feet celebrating their fabulous reading efforts with his ‘Umpire Dance’. Today was a wonderful reminder that reading is fun!

Thank you so much Adrian and Felice for being so generous with your time and helping us to celebrate our Yeo-Low Medal Award. We are the luckiest school library in Australia!!

Here are some photos from our day….

On Wednesday when I checked my blue tub for messages, I found a package addressed to me and when I flipped it over the sender was Felice Arena!

What a surprise to find a copy of Felice’s latest Sporty Kids books, Handball and Tennis and some bookmarks! 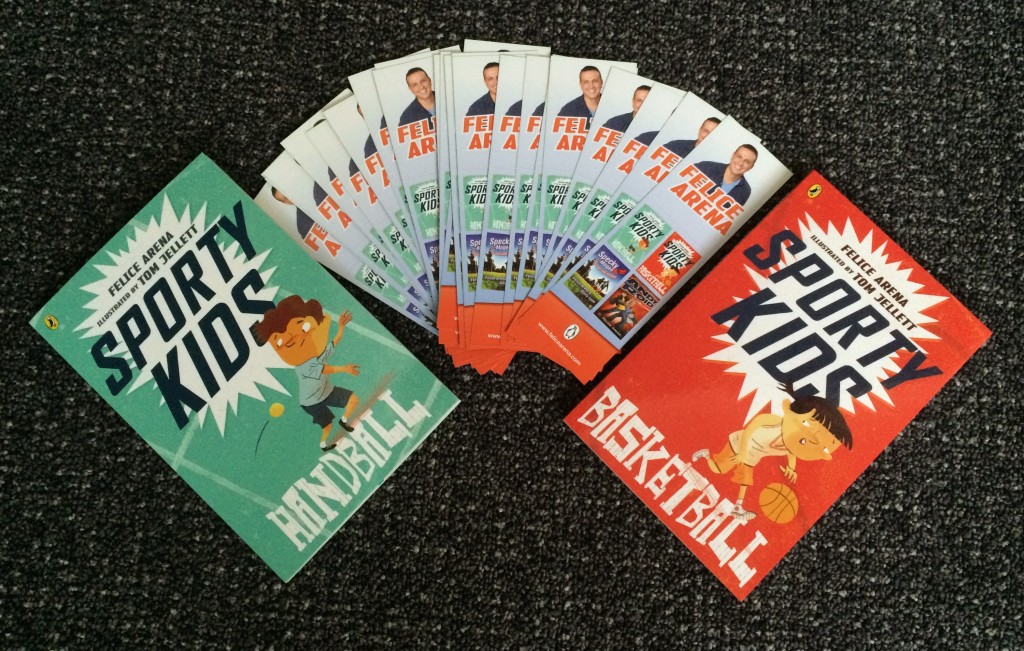 Felice also signed both of our books with a message. Here is our Handball book with one of Felice’s fans (who has some ideas of his own for some more Sporty Kids books)… 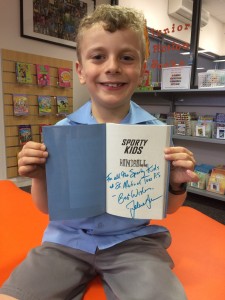 I wish Felice could have heard the cheers and excitement when I showed the Year Twos our copies of his books on Thursday in their library classes! We voted on which book to read and decided on the Handball book. We laughed in one class when two of the main characters, Luca and Stefan were actually sitting on the floor next to each other!! What are the chances of that happening?

Felice has a great way of pacing his stories and building excitement in his Sporty Kids books. The Year Twos listened with baited breath waiting to see if Luca would defeat Vinny Ping the Handball King in their handball challenge. They were also reminded of the importance of being a good sport when you are both a winner and a loser. 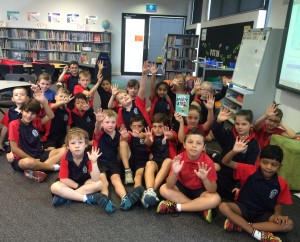 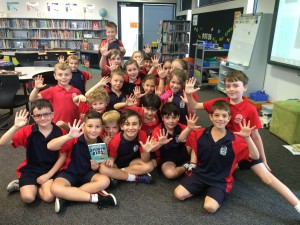 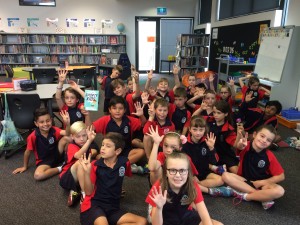 Thank you for our Sporty Kids books Felice and for making reading fun!

Now we need to decide on a fun challenge for students who would like to win one of Felice’s bookmarks. If you have an idea please write it in the comments section…