I was at the movies today and saw the movie preview for one of our books in the LRC. How to Train Your Dragon is written by Cressida Crowell. It is about the adventures of an 11 year old viking called Hiccup Horrendous 111. He is the son of a viking chief who must capture a dragon to pass his initiation test. If he fails this test he will be kicked out of his tribe. Hiccup’s adventures begin from the minute he tries to pluck a dragon from a “Dragon Nursery” where 3000 of them are hibernating …Click here to read a bit of the story and enjoy some of the funny sketches from the book.

This is the opening line of the story…. Long ago, on the wild and windy isle of Berk, a smallish Viking with a longish name stood up to his ankles in snow. Now come to the LRC to borrow the book and read some more before you see the movie!

The movie will be out on March 25th, but you can watch the trailer now.

Fans of  The Floods will already have enjoyed Colin Thompson’s rather quirky sense of humour.  They will also be pleased to know that he has begun a new series called Dragons and it combines Colin’s wacky sense of humour with the Legend of King Arthur and the heroes of Camelot.  The first book in the series is called Camelot.

The blurb below indicates that Colin Thompson’s version of the “true” story might not be quite like the one we already know…but what else would you expect from Colin Thompson!

In the days when dragons roamed the earth turning people into toast, a mighty King ruled the world. This King lived in the great castle of Camelot in the beautiful island of Avalon. Guided by the great wizard Merlin, this King became a legend and his name was Arthur.

The trouble with legends is that every time their stories are told they become more and more fabulous, so useless twits are often turned into superheroes.

This is the true story of King Arthur, who was not a superhero. He was a nasty little spoilt brat who was totally up himself.

We have lots of people who love to draw and borrow our drawing books. Liam R in 3BY borrowed “How to Draw Deltora Dragons” by Marc McBride. Marc McBride does an amazing job bringing Emily Rodda’s Deltora Quest characters to life!  Liam drew this wonderful dragon that has lots of detail.

If you have a picture you would like to go on our blog you can bring it to the LRC. 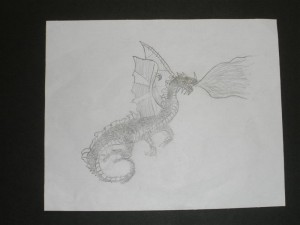