It was a HUGE day for reading and football on Friday, June 19th at St Martin’s!

Excitement was bubbling to Grand Final fever pitch as our 21 classes gathered in our hall to watch the highly anticipated stage performance of Kicking Goals For Readers by footy authors Felice Arena, Michael Wagner and Adrian Beck. These popular authors whose footy books cover from P-6 are combining their many talents ‘to take the action from the page to the stage’…

Wearing our footy colours and passionately singing along to footy team songs everyone was in the footy spirit. The hall erupted with laughter as Felice Arena emerged doing his ‘Umpire Dance’ and some rather fancy footy tricks! The scene was set for a combination of Aussie Rules football, music, multimedia, books and lots of fun.

There were so many parts of the show to enjoy, including each author performing a unique version of his footy team song. Who would have thought “Good Old Collingwood” could be sung as a folk song and be surprisingly soothing? We laughed at the video of the authors taking on 1GC’s Egg Handball Challenge and an unlucky author who ended up with egg on his face. Felice helped our very own ‘Specky Magee’ in Year 6 show us how to take a slow motion Specky while we all had fun barracking silently in slow motion. Imagine a capacity crowd barracking like this on Grand Final day at the MCG!

We also enjoyed listening to each author speak about his books and writing journey and the positive messages each imparted about writing, following your dreams and having a passion for what you do. It was also interesting to hear about the different paths that led each of them to becoming authors and great to see them collaborating with their show.

One thing for certain is that we will never look at umpires in the same way again after watching the dance moves in the hilarious “Umpire Funk” led by Felice with our very own Mr O and Mr Z. We might have to try out some “Umpire Funk” on our Footy Day in September with Mr O leading the way with his groovy freestyle dance moves. At the end of the show we noticed that the windows in our hall had actually steamed up from all of the fun and excitement!

After using lots of energy performing, our authors happily greeted long lines of eager fans and generously spent the afternoon in our library signing books and chatting with each child. It was a delight to see the looks on children’s faces as they met Felice, Michael and Adrian. There was such a wonderful buzz at the end of the day as students rushed to tell their parents about the performance and show them their signed books! Our authors had definitely achieved their goal of Kicking Goals For Readers and ‘taking the action from the page to the stage’…

Enjoy watching some of the highlights of Kicking Goals For Readers

I use Twitter professionally to connect with other educators and love the opportunity it also provides to interact with authors like Felice, Michael and Adrian. When Felice asked if they could trial their show with our school before their first official performance I was surprised, excited (and a tad nervous), but in the end I was SO glad I said “Yes”!  It provided me with a wonderful opportunity to do one of the most important jobs teacher librarians do…bringing children, books and authors together.

Thank you Felice, Michael and Adrian for an amazing experience for our school and a fabulous and fun celebration of books, reading and footy!

For those of us who LOVE our footy it’s almost time for the AFL Football season to kick off for 2015!

What better way to celebrate than at the Family Footy Fest where you can meet and have LOTS of footy fun with two footy mad authors Adrian Beck and Michael Wagner.

Where: The Little Book Room

Click HERE for more details and to book your place (Free) 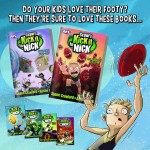 Adrian Beck is the co-author of the Kick it to Nick series with Hawthorn champion Shane Crawford.  We have this fun footy series in our library including the two newest books “Footybot Face-Off” and “The Fanged Footies” all ready for Term 2.  The Kick it to Nick books also have a website for you to explore HERE. 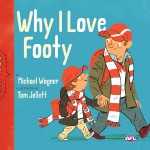 Michael Wagner is the author of the popular Maxx Rumble series and Why I Love Footy is his latest book. Michael  says…

“There are a bazillion reasons to love footy! These are just my biggest ones…

There’s the big tackles and amazing marks. There’s wearing the scarf and singing the song. But whether your team wins or loses, from the opening bounce to the final siren, the very best thing about football is that we do it together.”

I am definitely buying this book!  When I was little I went to the footy nearly every Saturday with my mum to barrack for our team North Melbourne and I would wear my duffle coat with number 36 on the back. I still remember how excited I was going to my first Grand Final in 1977 and the stunned silence around the ground when the game ended in a draw between North Melbourne and Collingwood. I was lucky to return to the MCG the following week and see North Melbourne win! I’m much older now and I still love wearing my scarf; travelling on the train with all the footy supporters; munching on hot chips (with vinegar); barracking for my team and singing the club song with my North Melbourne “footy family”.

Why do you love footy?

During the holidays I went to The Little Bookroom for a footy event to meet Michael Wagner.  He is the author of the Maxx Rumble series.  I went dressed as a mad Pies supporter.  That’s why I’m wearing a mullet and tatts in the photo!  (I came second in the competition to a Geelong supporter). 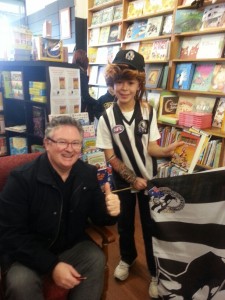 It was exciting to meet Michael Wagner and have my photo taken with him.  Michael signed my books “Stacks of Maxx” and “Grand Final Fever”.  He told us stories about his childhood.  In the future he is going to write soccer and basketball books.   Did you know that in the 1980s Michael was also a musician?

Michael barracks for the Pies like me!  Go Pies!!  (sorry Miss Y!)

Thanks to The Little Book Room (at Carlton North) Maxx Rumble fans can meet Michael Wagner on Tuesday, July 9th and have some footy fun too!

Maxx Rumble footy books by Michael Wagner are so popular at our LRC that they are rarely on the shelf ! 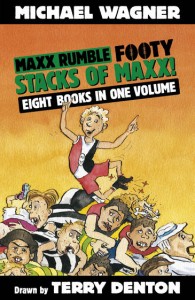