What a fabulous day celebrating books and reading at The Children’s Book Festival at the State Library of Victoria on Sunday.  It was wonderful to meet lots of students from our school at various places during the day!

Storytelling with Boori Monty Prior 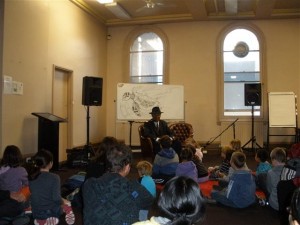 We had lots of fun helping Boori tell his story about a pesky mosquito!  We made mozzie noises and then had to try to catch the pesky mosquito.  Boori tells lots of great stories from when he was a boy….

A conversation between Gabrielle Wang (author) and Sally Rippin (illustrator)

Last year we really enjoyed reading  “The Race for the Chinese Zodiac” written by Gabrielle Wang and illustrated by Sally Rippin.  During their chat it was interesting to discover that both Gabrielle and Sally learned Traditional Chinese Painting at the same place in China but at different times! 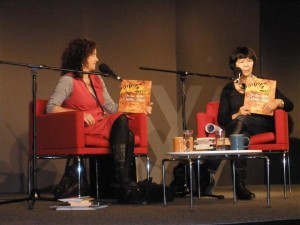 Rice paper – the paper is very thin. You never go over the same stroke twice because it makes it dirty

Ink stone and ink stick – add water and grind the ink stick on the stone to make ink.  As you grind your ink you can relax and think about your painting before you start 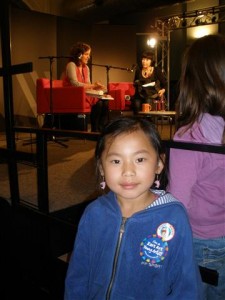 Sian was there too as Sally explained how she sketched her illustrations in pencil first and then chose the best one to put on a light box and carefully added the brush strokes.  The illustrations were then scanned into the computer and the colour was added.

The illustrations are both traditional and modern!!

Sally Rippin (and Billie B. Brown)

There’s a lot of Sally Rippin in her character Billie B. Brown!  Sally showed us some photos of her as a young girl and explained how lots of the things that happen to Billie in her books were actually things she had done when she was younger!  Here was yet another author telling us that our own experiences can provide so many ideas for our own writing… 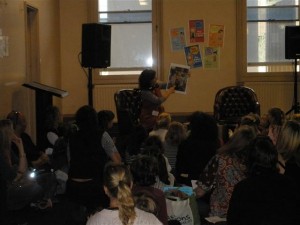 There was lots of excitement as children gathered eagerly around tables to learn how to draw a dragon from an expert!  Step by step Gabrielle taught the children how to draw the magnificent dragon called PENG from her book “The Hidden Monastery” 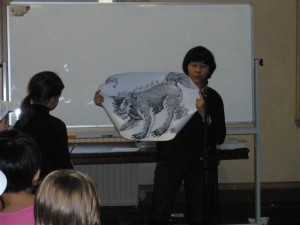 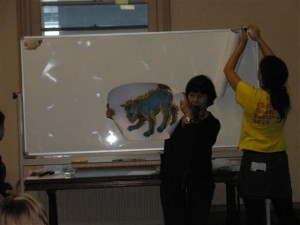 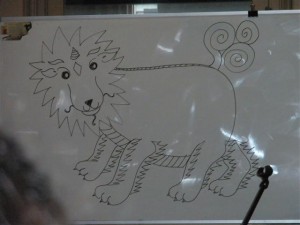 Our artists from St Martin’s followed each of Gabrielle’s steps to create their own Pengs…great job everyone! 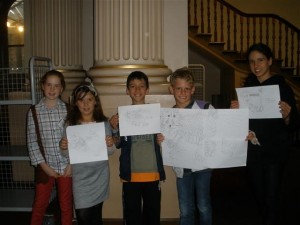 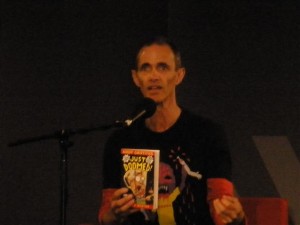 Andy Griffiths must be the rock star of authors!!  There was already quite a crowd when we arrived for his session at the Wheeler Centre and the room filled to standing room only!  Andy had everyone laughing out loud in no time with lots of great tips for how to annoy parents over the holidays. (The kids who went to the session will be able to share these!)

Andy wrote the first “Just” book in 1997 with “Just tricking” and now he is about to release his eighth book in the series called “Just Doomed”.  He told us he had loved the word doomed from a very young age.  When he was six years old he wrote this in a card for his dad…

“Dear Dad, get well soon or you will be doomed” 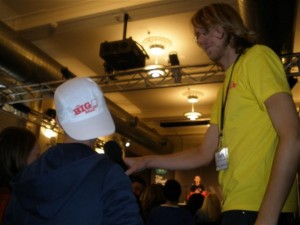 I bought a copy of “Just Doomed” and couldn’t wait to read the last story in the book called Just Nude after Andy told us about it.  I laughed out loud on the train nearly all the way home….